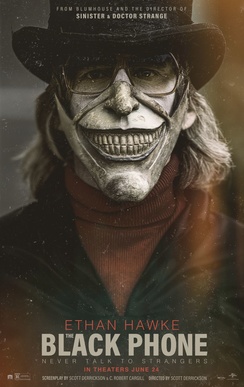 It's hard to imagine what Scott Derrickson's Doctor Strange 2 film might have looked like, but it's clear with his latest offering, The Black Phone, the horror filmmaker has found his calling. After splitting with Marvel due to the proverbial "creative differences," Derrickson turned his focus onto The Black Phone and, in doing so, he brought a new horror classic to life.

Set in the late 1970s and based on a short story from Joe Hill, The Black Phone is a perfect mix of serial killer nostalgia and total fear that few other horror films seem capable of tapping into these days. As someone who grew up in the late '70s and early '80s, this film struck a particular unnerving chord for me.

I grew up in the suburbs of Detroit in 1984 and while we were cheering on our beloved Detroit Tigers to their fourth (and last at the time of this writing) World Series crown, a sinister serial-killing team of Alton Coleman and Debra Brown were menacing the Midwest and laying siege to my childhood.

There's supposed to be an innocence associated with being a kid, but much like the children in The Black Phone, I could relate to living in fear of becoming the next victim. As a parent to children at the same age that I was in 1984, I find it oddly satisfying that we've seemingly progressed beyond a state of constantly living in this type of fear.

Finney Shaw, a shy but clever 13-year-old boy, is abducted by a sadistic killer and trapped in a soundproof basement where screaming is of little use. When a disconnected phone on the wall begins to ring, Finney discovers that he can hear the voices of the killer's previous victims. And they are dead set on making sure that what happened to them doesn't happen to Finney.

Right off the bat, The Black Phone establishes the most authentic portrayal of the late '70s that I've seen on film in a long time. It's not just about polyester and shaggy haircuts either. No, there's a real immersive element of the entire production that really projects what my memories of this time period recall.

From the opening baseball game where the kids who lose don't get participation trophies to the way Finney and Gwen's Dad exudes an aura of aloofness, it's clear that this family has been through a lot. And while we get glimpses of the tragedy that has brought them to this point in life, the film doesn't navel-gaze on it. As we used to say back then, "rub some dirt on it and move on."

Played wonderfully by Jeremy Davies, Terrence is an amalgamation of so many fathers of this time period. They weren't as in touch with their feelings as Dads tend to be now, but it doesn't mean that their abusive, tough love was meant as anything less than familial love. For a modern comparison think of William H. Macy's turn as the patriarch in Shameless.

This time period wasn't a particularly happy moment for the United States (and the world as a whole) and you can feel that emotion drip off of the screen in the opening ten minutes of the film. Forget the masterful performance turned in by Ethan Hawke (and we'll get there, don't worry) and the wonderfully crafted suspense from Derrickson and his filmmaking partner C. Robert Cargill, the way they were able to evoke this singular moment in time might be the most impressive achievement from this movie.

As I mentioned above, this film is based on a short story from Joe Hill who is, of course, the son of horror legend Stephen King and you can see his influence on The Black Phone. But then again, which horror film today doesn't pay some sort of homage to the master?

In particular, I felt a strong kinship to It while watching The Black Phone, just without all of the supernatural elements. Although, I suppose you could argue that a couple of the characters might have a little "Shine" in them.

With talks swirling about a possible sequel (maybe prequel?), I, for one, would be very interested to see more backstory developed around Finney and Gwen's deceased mother.

Any review of The Black Phone would be remiss if it didn't mention the absolute yeoman's work turned in by Ethan Hawke. While not particularly known for playing sadistic killers, his transformation into "The Grabber" is so amazing and complete that I had to keep reminding myself that it was indeed Ethan Hawke under that mask.

Perhaps like other actors of his age, this will be the beginning of a career change where Hawke will start fashioning a cottage industry out of playing creepy psychos. If so, take my money because if this film is any indication, that's a series of films that I would love to consume.

Finally, what I particularly enjoyed about The Black Phone beyond what I mentioned above is the way the filmmakers purposely skirted issues and didn't spoon-feed the audience. I feel that it's always best to let the viewer fill in the crevices with their imagination especially when it comes to horror.

There's nothing more sinister that they could have filmed than what my mind would conjure up to fill in the gaps. It's the mark of a great director to show this sort of restraint when human nature is telling you to make sure you fill in all of the plot holes.

Let me tell you, there weren't any plot holes that I could find.

The Black Phone is now available on Blu-ray and DVD.