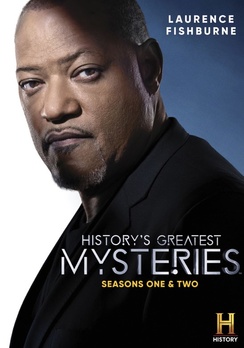 I admit it. I'm a huge History dork.

I literally could spend all day and night watching History channel programming, especially their docu-drama recreations of historical mysteries. There was an old show simply called History's Mysteries that ran for like 15 or 16 seasons and tackled everything from the death of Marilyn Monroe to Lizzie Borden and almost anything in between.

While most shows were well-produced and compelling, however, there were a few stinkers along the way. I mean how could you not "phone it in" somewhere around season 10 or so? While the shows were presented by Arthur Kent and narrated by David Ackroyd, the "Scud Stud" could only carry the show so far.

Over the last few years, the History Channel has tried to up the ante as it were by bringing in the big guns like Fishburne and Morgan Freeman to host and narrate their new shows. The result has been nothing short of brilliant as I could literally spend all day listening to these two read the phone book.

History's Greatest Mysteries is a series of investigative specials that take the world's most well-known mysteries and challenge everything we know about them. Narrated and hosted by Laurence Fishburne, the franchise will delve into a wide array of some of the most historically important mysteries of recent times: what was the true reason the Titanic sank? Where did D.B. Cooper disappear to? Did John Wilkes Booth live? Using fresh, new evidence and perspectives, including never-before-seen diaries and advanced DNA testing, History's Greatest Mysteries will unearth brand-new information on some of History's most famous and enigmatic chapters.

History's Greatest Mysteries: Seasons One & Two is a collection of the first ten episodes of this new series. I don't know the whole background of this show, but I imagine that COVID played a part in the odd episode counts from these two seasons.

Season One contains six episodes, while Season Two only released four episodes. With each episode clocking in over an hour though, it really feels like there's more meat on the bone than the total episode count would suggest.

I am glad that they went ahead and combined seasons one and two on a single DVD offering as these first 10 episodes feel like a more complete set. The topics range from D.B. Cooper to Houdini and while some of the material might be familiar, the strength of this series is providing new information on their topics.

For instance, Season One ends with a three-part exposÃ© on the Roswell incident. As someone who is fascinated by UFOs, aliens and Roswell, I didn't think these episodes would move the needle much for me, but I was wrong. Not only did I discover new facts that I hadn't known before, but they went so far as to interview first-hand accounts and relatives of the major players.

In addition, they brought to bear new technology to try and decipher the infamous Ramey memo and handwriting analysis on a newly discovered journal. While the investigations are ongoing (followup, am I right?), the massive deep-dive was compelling and even interested my daughter who is just getting into these sorts of true mysteries.

Meanwhile in Season Two, the highlight episode for me was the one focusing on Houdini's lost diaries. Again, much like the earlier episodes, this program shed new light and brought new technology to the discussion. While the aim of the episode wasn't to definitively prove how Houdini managed his incredible escapes, the diaries provided new insight into his mindset.

They also teased a potential conspiracy surrounding his death and the spiritualists that I hadn't really seen elucidated in such a distinct fashion. I guess I had never thought about the potential that Houdini was murdered, but I suppose anything is possible.

For those curious, the third season is currently airing on the History Channel and is up to 13 episodes. So, it would appear that the success of the first two seasons or the easement of COVID restrictions has allowed them to fully realize the show's vision.

Whatever the reason, I'm all for it and can't wait to see where they take us next. The series does a great job of providing historical context and adding something to the narrative. It really is must-see TV.