Review: 'Eraser: Reborn' holds its own against Schwarzenegger 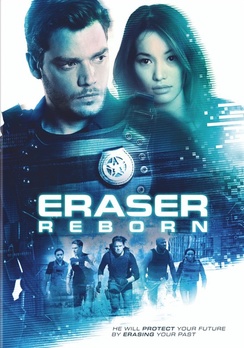 I remember going to see Eraser at a drive-in theater in the Summer of 1996 with high expectations. At the time, Arnold Schwarzenegger was at the height of his action persona, but looking back, this film may have been the harbinger of change. Within a year, he'd be featured in Batman & Robin (Holy, Bat-Nipples!) and his downward spiral would be in full swing.

But, before that, we had Eraser. The few memories that I retain of that film are positive and confirm that Schwarzenegger was still the action we all remembered him as being.

Since then, we certainly have a few other things to equate to him, but let's not digress.

So, you have to imagine my intrigue and curiosity when it was announced that Warner Bros. was bringing Eraser: Reborn out to Blu-ray and DVD. There would be no theatrical release. No Arnold. And no Vanessa Williams (what has she been up to lately?).

So, expectations were firmly planted on the floor, but did Eraser: Reborn deliver?

A U.S. Marshal âerasesâ a federal witnessâfaking her death to hide her deep in the witness protection programâonly to have a breach within his own department that puts them both on the run.

The most vivid thing that I remember from the original Eraser was the ground-breaking (at the time) technology where the guns had the ability to "see" through walls. Not only was the technology interesting, but it made for a few killer scenes (no pun intended). But, the general gist of the film was that Arnold played a Marshall with a certain set of skills to "erase" people by faking their deaths and getting them into deep cover witness protection.

I'm sure the success of the original film's release and the timing made it a sequel priority for Warner Bros., but a confluence of factors come to the surface and no sequel was ever attempted.

Fast forward twenty-six years and enter Eraser: Reborn. None of the principals from the original film were involved and it truly does feel like WB took a script and shoe-horned in a couple of references and voila!

All of that said, Eraser: Reborn is not a bad film. Quite the contrary, it's a rather compelling little actioner that is one of the better Covid action direct-to-video titles to come through the pipeline. But, judged against the original film, no direct-to-video lower-budget film is going to come off favorably.

Of course, going back and revisiting the original film through clips and trailers, the technology of today almost makes up for the budget constraints. Almost. But, there's just something lacking about having an action film headlined by a practical no-name star like Dominic Sherwood.

Among the high points of Eraser: Reborn was the backdrop of Capetown, South Africa. It's an interesting location that is familiar, but different enough to make the action seem fresh. And the filmmakers really do try to elevate the material to a higher level, but in many cases, the film shows its warts.

Not everyone will love Eraser: Reborn, but most people who aren't looking for a faithful budgetary sequel to the original film should enjoy it. Your mileage may vary, but I found it to be a worthy distraction from the mundane for 80 minutes.

Eraser: Reborn is now available on Blu-ray and DVD.