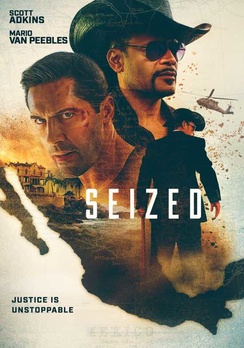 I believe that I was a bit critical of Scott Adkins in an earlier review for his film Legacy of Lies from July. To be honest, I wasn't that familiar with his work and perhaps my ire should have been better aimed at the director.

It's true that Legacy of Lies was a pale imitation of the John Wick films, but that wasn't Scott's fault. By comparison, Seized definitely delivers more on the John Wick-esque promise of the previous film by showcasing the pure action skills of Mr. Adkins.

This time around Adkins plays a former Special Forces agent named Nero who is forced to wipe out three rival crime syndicates when his son is kidnapped. As the bodies pile up Nero must finish his mission and discover the man behind his son's kidnapping in order to enact his revenge.

Let's face it. The global pandemic has forced us to readjust our expectations when it comes to home entertainment. It's been said countless times, but without a reliable pipeline of theatrical releases, studios have been forced to dig deep into their vaults and shelves for viable films to release.

It's easy to see that a glut of movies were made following the success of John Wick using the same mold. Normally, I would be critical of the shameless plagiarism, but desperate times call for desperate movies.

I predict that Seized will have no trouble finding a sizeable audience thanks to a dearth of quality action movies. And make no mistake, Seized is a quality film that not only showcases the martial arts skills of lead Scott Adkins but allows the filmmaker's unique style to shine through.

Mario Van Peebles is a top-notch supporting actor and he's great here as the personification of pure evil. He brings considerable weight to the role and he's clearly having fun which gives the audience a nice foil to Adkins' Nero.

Seized is good enough that it would have been a sleeper hit in the best of days, but with COVID, it gets its chance to shine and it doesn't waste the opportunity. Do yourself a favor and check out this film, especially if you have a weakness for mindless action violence.

I'm quickly jumping on the Scott Adkins bandwagon and there's plenty of room. It's clear that he's filling a need right now and perhaps his career will come out on the other side of this pandemic with renewed vigor. I could easily see Scott's profile rise to the level of A-list action hero.

Seized is now available on DVD.