Review: 'Intrigo: Death of an Author' is a well-crafted riddle 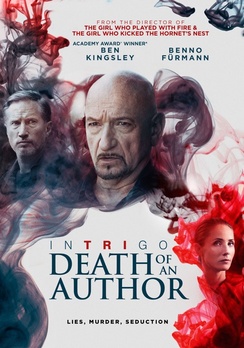 There must be something in the Scandinavian water. With Stieg Larsson and Fredrik Backman delivering some of the most interesting and perverse thrillers in recent years, fans of the genre have been turning their eyes to northern Europe.

One author that has so far remained under the radar a bit is Hakan Nesser. At 70 years old, the author is finally starting to get the recognition he deserves for his crime thrillers. His novel provides the inspiration for this week's film Intrigo: Death of an Author.

Intrigo: Death of an Author is a well-crafted thriller that will certainly keep you guessing until the final moments. A man seeks out a best-selling author to get his feedback on a novel that he is writing. The lines between reality and fiction begin to blur when motives are questioned and everyone has something to hide.

This film is one of those little gems that hasn't been advertised to death which allows viewers to come to the story fresh. I went in with absolutely no foreknowledge of the movie other than it stars the incomparable Ben Kingsley. After watching Intrigo: Death of an Author, I wish that I would take this approach with more films. It really hit the same tone for me as other indie gems such as Thoroughbreds and A Simple Favor.

While 671{Ben Kingsley is deceptively used almost exclusively in the framing device of the movie, his performance is anything but perfunctory. His name is certainly used to give the otherwise European cast more swagger with U.S. audiences, don't let that fool you. Benno Furmann pulls double duty as the lead in both the framing device and the story-within-the-story and he does his best to convince you that he's every bit a Hollywood A-lister as Tom Cruise or Tom Hanks.

Of course, even when you know that a twist is coming, the best offerings in the genre will still surprise you. Thankfully, Intrigo: Death of an Author is one of those special films that holds back the best twist for last. Try as I might, I never saw it coming and I totally should have figured it out.

Without giving away the juicy details, there are various machinations that involve authors coming up with "perfect" murders or fake deaths and finding that sometimes its best to stick with what they are best at. And yet, I've always thought that suspense writers would make the best killers because they would be able to come up with all of the angles.

Ultimately, the film is a riddle wrapped in a puzzle in which multiple games of cat and mouse are running around in a maze with only one predetermined exit. Sometimes life is inevitable and no matter what we do we find that we are unable to break the mold and prevent the outcome.

Intrigo: Death of an Author is now available on Blu-ray and DVD.