Review: 'Line of Duty' is a tense ride 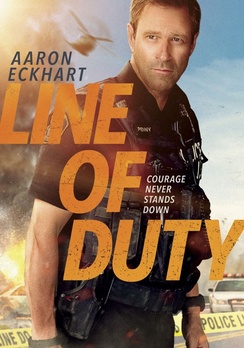 There is no shortage of cop films or media is the devil movies these days, but few are able to weave them together as successfully as Line of Duty. While the film is far from perfect, it was a pleasant distraction from the real news of the day with a bit of old-school escapism that just feels right.

Aaron Eckhart plays disgraced cop Frank Penny who is looking to right one of his wrongs and find the kidnapped 11-year-old daughter of the police chief. Unfortunately, his current suspended status requires Frank to partner with a young guerilla journalist to help catch the kidnappers.

What seems like a cross between The Rookie and 24, Line of Duty is able to deftly navigate the trappings of its TV brethren by its relentless pacing and a stand-out performance from Eckhart. It is his all-out performance that really saves this film from becoming simply yet another direct-to-video bore-fest.

I have long been an Aaron Eckhart fan and while he was mostly sidelined for his tenure in the Olympus Has Fallen franchise, he takes the reins here. He shows a remarkable nose for action that signals that perhaps he might be the next geriatric action hero. Of course, he's only 51, so he's still quite young for that moniker.

The film does get bogged at times when it tries to be something that it's not. At various points in the movie, the story takes its liberties against mainstream media and its version of fake news in a way that just seems redundant. Line of Duty works best when its propulsive action sequences are hurting past the audience, so these moments are distractions at best and failed attempts at political posturing at worst.

What does work is the hardcore genre action that will have you reminiscing about the good old days of the 1980s and 1990s with films like Lethal Weapon and Rush Hour. Don't worry Line of Duty doesn't approach the timeless wonder of these films, but it will make you yearn for those simpler times. Had Line of Duty been released during that halcyon period, then it's quite possible that it would have birthed a bevy of sequels itself.

As it stands, Line of Duty provides a solid 90 minutes of action escapism that will allow you to sink in and enjoy the movie without thinking about the real world. Sure, it could have benefitted from a slightly tighter run time and some script doctoring, but there are far worse ways to spend an hour and a half.

If you've got a hankering for some old school action, then Line of Duty will soothe what ails ya. Line of Duty is now available on Blu-ray and DVD.