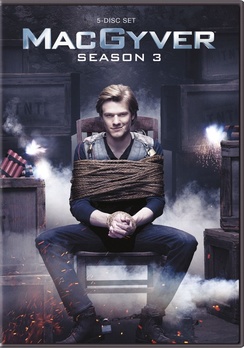 Long-time fans of the site will recall that I wasn't the biggest fan of MacGyver: Season 1 when it first came out. In fact, I didn't pick it up when it aired and was only exposed to it when I was asked to review the DVD.

Since then, I have become sort of obsessed with the show and it's becoming a regular Friday night watch for my son and me. You see, I was a massive fan of the original series and like most regurgitated things my initial reaction was to reject it. But something interesting happened when I watched that DVD, my son started to show an interest in the show.

As any parent can tell you, it is a major victory when you can find something that creates mutual interest between you and your children. This is becoming increasingly more difficult as technology drives a bigger wedge between us. So, I had to give this newfound common ground a chance to breathe.

After Lionsgate's initial reluctance to bring Season One to DVD (it debuted towards the end of the initial airing of Season Two on TV), they have discovered that releasing the DVDs in line with the show's return is good business. Season Two dropped right before Season Three debuted on CBS and this week's MacGyver: Season Three will give you just enough time to catch up ahead of February 7's debut of Season Four.

For me, Season Three was a bit of an up-and-down affair as the chemistry of the team seemed to reach a high point and then George Eads left the show. I was a massive CSI fan and I have to admit that he was more of a pull for me than Lucas Till and I was leery to see where the show would go from there.

Eads' departure happened roughly two-thirds of the way through Season Three, so we were able to get a sneak peek at what Season Four could become. Levy Tran's character was brought in and elevated to series regular and the chemistry between her and Till should keep the successful series afloat for several more seasons.

Besides, they sort of left the door open for Eads to return to the show further down the road if circumstances change or they need a ratings boost. Either way, I'm a bit bummed with his departure but excited to see where things go from here.

My son couldn't care less. He's become engrossed in the action and the unique ways in which MacGyver uses his wits to best his foes. Hey, if it gets him to put down his tablet and stop playing Minecraft for a few minutes, then I'm all for it.

The original series ran for seven successful seasons, so it will be interesting to see if the remake can match its total. With the show getting a mid-season return this year, some fans were concerned that it was on shaky ground. The ratings have been tremendous over the first three seasons, especially given its Friday time slot.

But the mid-season start and a full season without George Eads might be too much for the show to handle. I'm willing to bet that if the show's quality remains at its high standards, then MacGyver will be around to save the day for many more seasons. We'll find out next month.