Review: 'The Lighthouse' is a welcoming beacon in a sea of madness 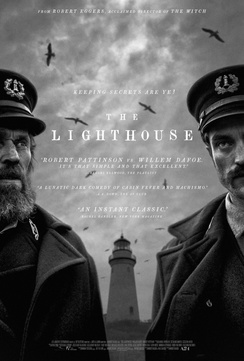 If you've never seen Robert Eggers's debut film The Witch, then you must do yourself a favor right now and seek it out. It is without a doubt my favorite horror film of the last decade and it created an indie star out of Robert Eggers.

So, it was with a bit of trepidation that I allowed my expectations to rise for his sophomore effort The Lighthouse as the positive reviews started to pour in. Would Eggers be one of those rare unicorns that is immune from the sophomore slump? I'm happy to report that he is one indeed.

In The Lighthouse, two lighthouse keepers are stranded on a remote and mysterious New England island in the 1890s during a massive storm. With the storm exasperating their severe cabin fever, the two men begin to think that the other has become dangerously unmoored.

When I first read the logline of this movie, I was a bit disappointed as I had just watched The Vanishing and The Lighthouse seemed suspiciously similar. Based on true events, I thought The Vanishing was OK, but I was hoping for something that was simply derivative from another work for Eggers' next film.

Thankfully, my fears were for naught as the two movies couldn't be more different from each other if they tried. While they went for a more traditional approach with The Vanishing, Robert Eggers continued to show the mastery of his craft with his unique and stylistic choices.

Much like he did in The Witch, Eggers wasn't shy about using a dark screen for an extended period to make his audience uncomfortable. He also didn't feel the need to have his small cast make small talk for the sake of speaking. In fact, the first spoken word isn't uttered until seven minutes into the movie. And from there, it's not like Robert Pattinson and Willem Dafoe took turns reciting Shakespeare soliloquies.

No, Eggers is an expert in silence and he allows his audience to brood and builds suspense in the great divide between spoken words. But, that's not to belittle the script because when these two would talk, they did so with an earnest flair for the theatrical, especially Dafoe.

While Pattinson turns in yet another strong post-Twilight performance, the real star is the craziness that Willem Dafoe brings to the table. As an impartial observer on the sidelines, we are left to take our own sides between the two, but I will always be team Dafoe with his sheer unabashed deliciousness that he exudes in this role.

Much like with my review of The Witch, I am hesitant to give away too much lest I ruin the movie for you, but I will say that I was hooked from the hop. The film is shot in black and white with a 4:3 aspect ratio and these choices are brilliant.

The black and white film is perfect for capturing that end of the 19th-century vibe while the smaller screen space traps the audience and fills them with the same sense of cabin fever that the characters experience on screen. These deliberate decisions speak to Eggers' mastery of filmmaking and do more than simply create a spooky ambiance, they contribute to the overall enjoyment of the film and younger filmmakers should be taking notes.

All in all, The Lighthouse is a strong entry into Eggers' oeuvre of throwback spookiness. Both films are brilliant in their use of a long-past era and the naivitÃ© that comes with thinking that we have somehow evolved beyond this primal fear simply because we were born in a different time period.

I hate to break it to you, having an iPhone or watching these movies in the comfort of my home did nothing to ease the terror and suspense that they built inside of me. Both of Robert Eggers' films were a delight and I can't wait to see what he has in store for us next.

The Lighthouse is now available on Blu-ray and DVD.