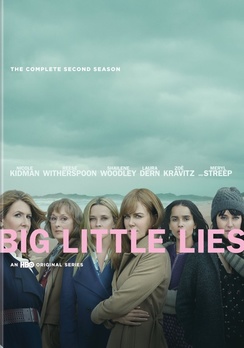 Warner Bros. Home Entertainment provided me with a free copy of the DVD I reviewed in this news story. The opinions I share are my own.

I'm sure HBO would be the first to tell you that I'm not the target demo of their highly successful show Big Little Lies, but I like to defy expectations. As a fan of the book, my wife was elated to see a tremendous cast bring it life on HBO and I tagged along for the ride during Season One and I was instantly hooked.

Not only were the Monterey Five women well written, but their male counterparts were given meaty roles of their own. In particular, I was impressed with the job Adam Scott did with his thankless role as Madeline's walk-over husband. Of course, the big question after the credits to Season One ended is where they would take the story in Season Two.

Since the book's events were all contained in the first season, David E. Kelley was presented with the tall order of trying to move these characters into uncharted waters. It's safe to say that he succeeded.

After the events of Season One, the Monterey Five look to pick up the pieces of their shattered lives as the spirit of Perry looms over them all. When Perry's mother Mary Louise moves to Monterey to be closer to her grandchildren, her presence stirs up many of the same unanswered questions from Season One. Will the five women continue to stand together or will they crack under the pressure?

What many thought would end in tragedy, HBO proved with Big Little Lies: Season Two that lightning can strike twice. Of course, it didn't hurt that they were able to bring in the formidable Meryl Streep to play Perry's mother. Her interactions with Celeste were among the several highlights of this new season.

Another interesting twist was just how involved Alexander Skarsgard remained with the show despite Perry's untimely demise last season. His specter continues to reign over the women of Monterey and it doesn't look like it will change anytime soon.

At the heart of the series, Big Little Lies is the relationship between the five women and the lie that binds them together. Some of them are better at keeping secrets while others are on the brink of falling apart. Through it all, it's the bond of these five that continues to drive fans back to the show.

With Reese Witherspoon's schedule filling up with new Apple TV+ series The Morning Show, it will be interesting to see how many more times we will return to Monterey. The second season ends on a bit of cliff-hanger that sets up for a rather juicy third season, but after that, it's anyone's guess where this popular HBO hit will go.

It is certainly possible that Witherspoon and Nicole Kidman could be written out of the show as easy as an address change, but will the show be able to survive their departure? More importantly, will the chemistry that these five women have built still be there if they are suddenly replaced?

That's certainly a challenge for David E. Kelley moving forward because if the ratings are any indication, the fans are clamoring to see more of their favorite Monterey moms. And to be honest, I'm interested to see how the guys react to the news bombshell that is certain to hit Monterey early in Season Three.