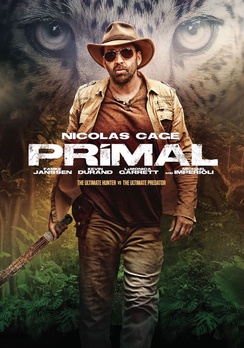 If you're a fan of Nic Cage and his certain brand of Cage craziness, then Primal will help you scratch your bizarre itch. Interestingly, the best Cage performance in Primal doesn't come from the man himself.

No, instead Nic Cage is uncharacteristically restrained in his role as a former zookeeper who turns to illegal animal smuggling to make ends meet. When he finally bags his white whale, er jaguar, his huge payday is jeopardized when U.S. Marshals secretly attempt to extradite an assassin to the United States aboard the same cargo ship.

The assassin in question is played brilliantly by the criminally underrated Kevin Durand. He seems to be the only one that realizes that he's in a Nic Cage film and he ramps up his craziness to the appropriate level. The result is an antagonist that would give Nic Cage a run for his money in his prime.

Sadly for Primal Nic doesn't seem all that interested in bringing that satisfying level of bonkers that the actor is universally known for. Instead, his protagonist Frank Walsh is mostly unlikeable and his arc doesn't really do much to give the audience much of a rooting interest.

I'll be honest, I was sort of hoping that the white jaguar would eat them both in the end and the audience would win for once. But, that's not the case. Instead, the film seems less interested in showing the CGI jaguar despite spending all of the marketing and buildup to the film in this cat vs. man vs. man epic showdown.

In the end, we are left scratching our heads as to who truly would win in a cinematic showdown. This movie feels a bit out of time and would tend to more accurately fit in Nic Cage's big-budget Jerry Bruckheimer period. Forget Snakes on a Plane, this is a mother-scratching jaguar on a boat, along with a ruthless assassin and peak Nic Cage.

Unfortunately, this scenario doesn't come to fruition mostly due to budgetary constraints and Nic's refusal to play ball. When you're no longer able to trust that Nic Cage will go full Nic Cage in his B-movie direct-to-video films, what else is left? Thankfully, this seems to be a blip on the Nic Cage meter as his work in the recent movies Mandy and Color Out of Space were more in line with his special brand of awesomeness.

That said, acolytes of Nic Cage will not leave disappointed. As I mentioned, Kevin Durand turns in a classic Nic Cage crazy performance and maybe this could be a bit of a passing of the baton. I mean, Nic surely can't maintain his high level of nutso forever and he's not getting any younger.

There will always be a certain number of these types of roles around and it's not easy to find someone who can capture that certain level of insane without encroaching upon campiness. Perhaps Kevin Durand's is getting its start with Primal. Could it be that we've found the Nic Cage successor? If so, I'd definitely be on board for the ride.

Primal is far from the best film you will find at the video store this week, but it fills a particular need and those that seek it out should get enough entertainment out of it to justify the rental. Of course, if you're looking for vintage Nic Cage, you might want to consider something else.

Primal is now available on Blu-ray and DVD.