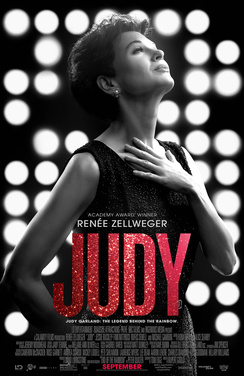 Despite portraying legendary singer and actress Judy Garland in the biopic Judy, Renee Zellweger is nominated for a Golden Globe for Best Actress in a Drama and not in a Musical/Comedy. Don't get me wrong, she's incredibly deserving of the nomination, but as I'm willing to bet that she sings just as many words as speaks, it's another one of those Golden Globe head-scratchers.

No matter what the category, Renee Zellweger delivers a career-defining performance as the child actress turned entertainer. Based on the successful Broadway play "End of the Rainbow," Judy sheds light on Judy Garland's final years while flashing back to the high and low points of her illustrious career.

I have to admit that most of my experience with Judy Garland came from her iconic performance at Dorothy in The Wizard of Oz. I'm willing to bet that most of the people my age and younger have the same experience with her growing up. However, as I sat down to watch this film with my mom, who is in town for the holidays, I got to see the multi-talented entertainer through new eyes.

It's hard to make a parallel for Judy Garland in today's world, but Taylor Swift might come close. Judy was a true multiple threat entertainer who was an amazing singer and gifted actress that rivaled some of the biggest stars in both screen and radio.

Today, we only seem to have a connection to her via The Wizard of Oz, but she was such a cultural phenomenon that she helped to pave the way for both actresses and singers ever since. So, it's only fitting that her life story was captured in a musical and finally given the big-screen treatment that it deserves.

Renee Zellweger is tapped to play Judy and this has been a long-gestating vanity project for her. While she has had some singing in her past work, this film takes it to a whole other level. For her part, Renee answers the bell brilliantly. She transforms herself completely in the role allowing herself to truly bring the larger than life entertainer back to life on the big screen.

The recognition and accolades that Renee has gotten (and will continue to do so) are hard-earned and completely justified. Even knowing Judy Garland in such a small way before watching this movie, I knew that it would be quite daunting for anyone to try and fill her ruby red slippers.

And yet, Renee is up to the task and more than that, she truly knocks the performance out of the park. There has been a relative lull in Zellweger's career since the Bridget Jones films and Judy proves that Renee Zellweger is back for good.

Not surprisingly, the film delves a bit into the dark underbelly of child acting back in Judy Garland's time. While the film centers mostly on the studio's insistence that Judy takes drugs to meet the obligations of her incredibly packed schedule, the film also hints at other emotional and physical abuses that child actors of this time have unfortunately experienced.

While it's hard to watch these scenes, we should be thankful that they exist to make sure that we are properly educated to these abuses and ensure that they never happen again. Some things in Hollywood never change and it's not surprising to see these same abuses of power lead to wide-sweeping allegations in light of the #MeToo movement. However, perhaps if more films like this can shed light into these dark areas of the past, we can root out these terrible individuals.

Judy is one of those prestige pictures that deserve to be seen by as many people as possible. I am hopeful that the coming awards season boost will help it get the recognition that it rightly deserves. Renee Zellweger is phenomenal and do yourself a favor and pick yourself up a copy for Christmas.

Judy is now available of Blu-ray and DVD.