Review: 'Daybreakers' continues to be ahead of its time on 4K 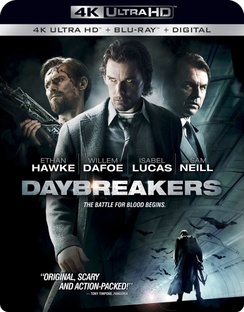 Though technically released in 2010, the events that spawned the film Daybreakers took place in 2009. Of course, the majority of the film takes place in a dystopian future a decade later in 2019 where vampires have taken over as the dominant species on Earth.

While it's not hard to imagine this view of 2019 at the time as the world was literally obsessed with everything vampire from glittery ones to hardcore HBO ones. It seemed like it was only a matter of time before the vampires took over. I'm happy to report though that we are all safe and sound here in 2019 with the only vampires around are still confined the imagination of the big and little screens.

So, in its truest sense Daybreakers has always been ahead of its time and now that time has literally caught up with the film, I'm happy to report that it is still a visionary film well ahead of its time.

Ethan Hawke plays a vampire hematologist, Edward, who is working to come up with a synthetic blood source as humans have been hunted to near extinction. With the Earth's blood supply (aka Humans) not predicted to last a month, Edward stumbles upon a group of humans who may hold the key to not only vampire salvation, but an outright cure itself.

If you haven't seen Daybreakers yet, then do yourself a favor and go get it right now. It's worth seeing and this new 4K UHD version truly presents the film in the best possible light (no pun intended). If, like me, you have seen the film and love it, then you'll want to take this opportunity to relive a film that was surprisingly cutting-edge back in 2010 and has only gotten more relevant as it has caught up to its dystopian present.

Whether intended or not, it's a very simple allegory to replace the whole vampire aspect with global warming and realize that the dystopian future the film predicted is very much closer to reality than some might care to admit. With countless red flags going off around us and little to no action from those in power to enact real change, we may find ourselves in the uncomfortable position of the vampires in Daybreakers where we are measuring our species' life expectancy in days.

But this review isn't really intended to be a sermon, but rather a celebration for the film and an admission that perhaps the filmmakers truly were a bit ahead of their time. When Daybreakers was released, it was met with mixed reviews and audiences mostly rejected it. Of course, that could have something to do with it being released in the frigid dead period of early January. The fact that it made $30 million at the box office is itself a miracle.

Ethan Hawke is superb as the conflicted vampire and really mines some of the same territories as he did in Gattaca. The fact of the matter is that Daybreakers is more of a sci-fi than a traditional horror film and back in 2010, people really just wanted some old-fashioned bloodsuckers.

That being said, Daybreakers features some great acting. There's the aforementioned Ethan Hawke who is always brilliant and Sam Neill vaping it up as the lead vampire baddie a bit against type and it is excellent. Of course, the real scene-stealer in the film is Willem Dafoe who is obviously having a ball as Elvis. Not THE Elvis, but he might as well be because this character is a real show-stopper.

The Dolby Vision transfer on the 4K UHD has been cleaned up quite a bit and it really gives the stylish film the look that the filmmakers were going for. I always felt that the previously available Blu-ray was rushed and the color balancing was a little off. It's hard to explain, but I just felt that it was intentionally blurry. Now, the film is crisp and the detail is exquisite. Naturally, the film's many low-light scenes are enhanced and add to the film's creepiness.

The real bellwether addition though is the Dolby Atmos soundtrack. It really opens up the sound effects in ways that you never knew were missing. The use of the vertical track really heightened the suspense and added elements of terror that are missing on the existing audio track. Again, the inclusion of an Atmos track really should be the standard for 4K UHD films as they add so much detail and really gives the film a more theatrical presentation in the home.

Overall, Daybreakers is a film that may have truly been before its time, but is also worthy of discovery by a new audience. The 4K UHD version truly gives the film the treatment that it deserves and would be a worthy addition to your collection.