Review: 'The Souvenir' gives us two Swintons to love 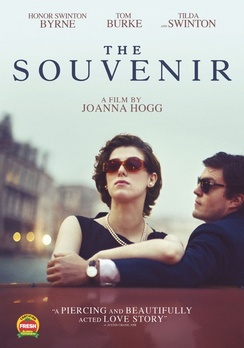 There's no denying that Tilda Swinton is a Hollywood treasure. The only question that remains is how is it possible that the talented actress has only won a single Oscar?

The one thing that defines a Tilda Swinton performance is unpredictability. She's an actress that is just as comfortable playing a high society woman or a grumpy old man. Her transformations are legendary, but it's her acting chops that have directors drooling to work with the wonderful actress.

For writer-director Joanna Hogg, she got the opportunity to work with two Swintons for her latest film The Souvenir. The Grand Jury Prize winner from this year's Sundance Film Festival, The Souvenir follows a turbulent love story between a shy and ambitious film student and an untrustworthy man.

The film is based on certain elements from Hogg's own experiences and you can see the impact of the innocence in film student Julie as she navigates her first foray into love. Unfortunately, the film industry has been plagued with older men who take advantage of younger women and the fallout is still being uncovered to this day. So, it's not a stretch to draw a parallel between the events in The Souvenir and predators in Hogg's life as she was getting her start in the industry.

And yet, memory is a funny thing and love, or the appearance of love makes us do weird things and that's where The Souvenir really shines. The film is told partially in flashbacks where we rely on Julie's recollections where she has obviously polished the reality into a state of disbelief. She's able to reconcile the abuses of Anthony now with her false memories of a better time.

Love is blind as they say and despite the best wishes of her friends and mother, played by Tilda Swinton, Honor Swinton Byrne's Julie is unable to break free from the bonds of an emotionally abusive relationship until it's almost too late. And yet, this is a tale as old as time as they say. We all know someone who is in a bad relationship, but much like an addiction, they are unable to free themselves.

Hindsight is 20/20 as they say and with The Souvenir, Joanna Hogg is able to provide a cautionary tale that will hopefully provide a wakeup call to other young women looking to break into the industry. But the film isn't just another inside baseball tome, no it has a greater appeal that will hopefully resonate with younger people as they establish their identity that they do not need to depend on others to find worth in their lives.

While it goes without saying that Tilda Swinton is phenomenal in this film, she is nearly upstaged by her remarkable daughter in her feature film debut. Honor certainly proves the old adage about the apple not falling far from the tree true. She is a revelation that brings a certain innocence and naivitÃ© to the role that might be a challenge to a more experienced actress. And yet, at the same time, she has inherited that certain je ne sais quoi that her mom has been perfecting for years.

Given that The Souvenir centers on the love story between Julie and Anthony, there is nowhere for Honor Swinton Byrne to hide. Thankfully, she is able to answer the call and give a performance that other actresses have to perfect over dozens of movies before they can command such gravitas. It also doesn't hurt that her co-star Tom Burke is a budding star in his own right, although this is the first time that I've seen him play such a dastardly character. It's a refreshing choice and one that he is more than able to conquer.

Overall, The Souvenir is one of those films that haunts you from the moment that you start watching. Its pull doesn't stop with the credits either, it is a movie that will capture your thoughts long after it ends. The future is bright for these two stars and I, for one, can't wait to see what they have in store for us.

The Souvenir is now available on Blu-ray and DVD.