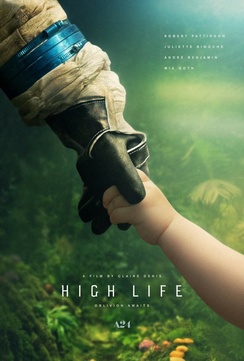 It's OK. We can finally admit it. The Twlight films were lousy. Well, unless you were a pre-teen or teen girl infatuated with the idea of sparkly vampires and unbridled passion. Of course, it didn't help that the object of said passion was perhaps the most passionless performance ever turned in by lead actress Kristen Stewart.

Thankfully, she has put her past behind her and has actually demonstrated quite a bit of range and acting chops recently. So too, her co-star Robert Pattinson has also proven that there's more to him than sparkly skin. While he's set to be the next Batman, Pattinson has been killing it (no pun intended) in a string of artsy indie films that really showcases his surprising range.

In High Life, Robert Pattinson plays Monte the last of a space crew made up of death-row inmates sent to explore the outer reaches of our solar system. The mission wasn't what it was supposed to be as a doctor with sinister motives may have jeopardized the entire crew leaving Monte and his daughter to rely on each other for survival.

First of all, I will let you know that not everyone reading this will enjoy this film. While it is extremely well made and one that I enjoyed quite a bit, director Claire Denis has a distinct visual style that might be off-putting to some. The non-linear storytelling also takes a bit to get used to, but once you do, the story that blooms is one that helps to further the discussion in modern science fiction.

In some ways the film reminded me of newer Sci-Fi classics such as Ex Machina and Sunshine and bizarre films such as Mother! and Suspiria. I realize that these are spectacularly different films, but if you watch High Life, it will sort of make sense. Ultimately, all of the films delve into the human question with a heavy helping of madness and sexuality. Who are we? What ethical ramifications do we have as a species within a much larger universe?

While High Life doesn't spend too much time digging into the big questions or pointlessly gazing at its navel, what it does do well is present a hauntingly sterile look at the machinations of man within the construct of our society. Once we remove these self-imposed rules of society, our more basal urges and sexual instincts kick in with catastrophic consequences. And yet, High Life does a good job of coming full circle, even if it's in a roundabout sort of way of providing an ounce of positivity in an otherwise bleak situation.

All of this wouldn't be possible if it weren't for the incredibly impressive acting chops of Robert Pattinson. That's a sentence that I never thought I would ever write a decade ago and yet, here we are. For almost half of the film, Robert acts against a very young child or alone, so the weight of the film is quite literally on his shoulders. Thankfully, he is up to the task and delivers what might be his most complete cinematic performance to date.

While the duality of the film is quite balanced at the end of the day, I found that it works best when the frenetic pace of it gets off the tracks as the craziness builds as the fate of the crew is revealed. I won't give up any spoilers here, but it becomes apparent as to why Denis chose this unconventional storytelling technique and she crushes it.

Again, High Life is not for everyone, but if you like your Science Fiction with a huge helping of crazy, then this film is for you. Again, I can't believe that I'm saying this, but Robert Pattinson is turning out to be a very intriguing actor in his own right, but I wonder if playing Batman may ultimately stunt his growth as a thespian. I guess only time will tell.

High Life is now available on Blu-ray and DVD.