So, Jason Statham has a new movie coming out (The Meg - think Jaws but with a bigger shark) and that means that Lionsgate is going to leverage the film's theatrical coattails to release a 4K UHD catalog film from the Statham library.

This is a strategy that Lionsgate has been employing as of late and I applaud them for it, but it just seems odd to release Transporter 3 all by itself. I mean, why not release all three of them and really go for it? Oh yeah, that's right, the first two films belong to Fox before the series shifted over to Lionsgate for the third installment. Awkward.

Still, Transporter 3 seems like an odd choice here. Lionsgate could have gone with Safe or the Crank films and avoided this whole lack of symmetry, but what do I know? Actually, there is a bit of precedent here as Lionsgate previously released Mechanic: Resurrection on 4K UHD, while the original film, owned by Universal, still has yet to make its way to 4K UHD.

But Crank will have to wait for another day as today brings us Transporter 3, a film that I wasn't completely blown away by when it released a decade ago. Jason Statham is back as Frank Martin, a man who specializes in delivering packages with no questions asked. Of course, throughout the series, it seems like all Frank does is ask questions. In the third installment, he is coerced by the threat of an explosive bracelet to deliver his passenger to Budapest and people get beat up on the way.

Upon re-watching the film, I remembered what bothered me so much about it. Transporter 3 fell into the fad that was all the rage back then which was to rely on a gimmick to handicap its protagonist. For this film, the MacGuffin was the explosive bracelet and while it was certainly novel to the franchise, it was a gimmick and you can tell exactly what's going to happen from the opening moments.

Also, I'm not sure if it was the move to Lionsgate or the new director, but it seemed to me that the action and stunts were a couple of notches below the standard set in the previous two films. I mean, this isn't rocket science, it's a Jason Statham action film that is meant to be a popcorn flick. I have always found that these types of films work better when the protagonist isn't handicapped in an artificial way. See either John Wick film. Although to be fair, the handicapping premise in Crank works for Statham, so maybe the filmmakers were simply trying to recreate that film.

I need to point out that I love me some Robert Knepper. I thought that his special style of sleaze was perfect for Prison Break, but it just didn't work for me here. I'm not sure exactly what it is, but I think the European setting of the Transporter films necessitates a Euro-trash thug more than a redneck, although I'm still unclear what background Johnson has other than the slimy big business boss.

I will say that the 4K UHD picture really added a bit of cinematic quality to the film, despite only being upscaled from a 2K print. The HDR and wider color gamut really makes the film shine and bring out the international locations that have been a staple of the Transporter films.

The real selling feature of the 4K UHD though is the new Dolby Atmos audio track. It provides such a better experience that even my wife who usually doesn't have an ear to notice such things commented on how better the sound mix was on the 4K UHD versus the Blu-ray. The 7.1 DTS track on the Blu-ray tended to muddy the action sequences so that they ended up being little more that escalating noise. But, the Dolby Atmos track provides a better directionality of the sound and the dialog is crisp and not drowned out by the big bangs.

The included special features are all available on the existing Blu-ray, so there's not really much in the way of extras to compel you to upgrade. I was hoping that with it being around the 10th anniversary of the film's release, they would have gone back to the talent to include a retrospective piece or something of the like. The Transporter films certainly have a place in the guilty pleasure of car chase action flicks, so it would be fun one day to go back and hear from Jason Statham and Luc Besson about its cultural impact.

If you're a Jason Statham completist or just never got around to buying Transporter 3 the first time around, then you can't beat the visual and audio upgrades on the 4K UHD. However, if you already own the Blu-ray, I'm not sure there's really much here to get excited about. 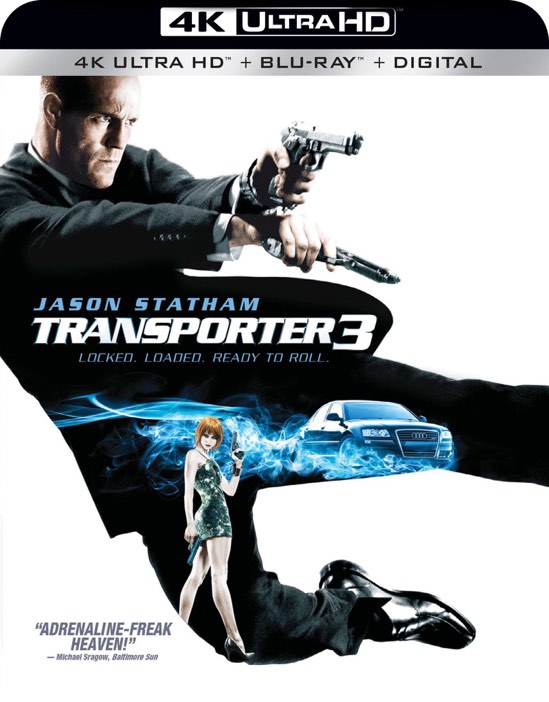