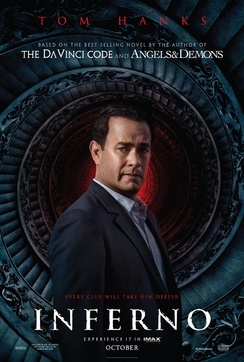 It's not that Tom Hanks really went anywhere. He's been here and there and popping up in films the last few years, but can you name the last big, even film that he has toplined?

After 2009's Angels & Demons, Tom has opted for smaller films and personal projects, but later this year he will slide back into Robert Langdon's shoes and get back to cracking symbols and breaking codes in order to save the world. Inferno is Dan Brown's fourth book, but the third film adaptation. Director Ron Howard has joined Hanks for each outing and they wisely chose to skip Brown's third book, "The Lost Symbol."

It's not that "Lost Symbol" is a bad story, but it's based in Washington D.C. and centers on the freemasons. To be honest, a film adaptation would look a lot like National Treasure and it would reduce Langdon from a world traveler to someone stuck in the confines of his own country. Personally, I think the Robert Langdon character works best when he's out and about.

For Inferno, the story borrows its title from Dante's "Inferno" and much of the symbolism and themes are also derived from this classic tome.

Much like the books themselves, the trailer leads to a clue "Cerva Trova" that plays a significant role in setting the events of the story in motion. Much like the book, the clue points to a different video.

I dig the 360 degree experience and can only imagine that like the previous two Dan Brown films, there will be some sort of hunt involved with the marketing of Inferno. It debuts in theaters on October 28.