Monday Morning Mixer: 'Speed' sputters out of the blocks 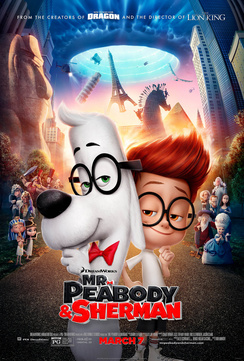 After driving back and forth to Detroit over the course of the last few days, I can honestly say that I'm as beaten up as the box office or whoever is responsible for Chris Brown going back to jail. Oh, that was too easy. Sorry.

For the record, Chris Brown was back in trouble for a parole violation. He is due in court today though, no word on if he'll be wearing a green suit to celebrate the holiday.

Speaking of, Happy St. Patrick's day everyone. I hope that you're wearing your green today to celebrate the one positive thing that my ancestors left this great world. Well, I'm sure there were others, but all of the drinking over the years has obscured the other feats.

'Tis the season for merry although, there was little to get too merry about at the box office, unless you happen to be a smart, talking dog and his adopted boy. In other words, there wasn't much green to go around, which is odd because I was pretty sure that we had a new Tyler Perry film opening up this weekend.

Maybe I was mistaken.

Nope, I wasn't. Tyler Perry's The Single Moms Club bombed and I mean bombed (relatively speaking and pretty much all other forms of the word) with a measly $8.3 million. That is officially the worst opening ever for a Tyler Perry-directed film. There was a time when all you had to do was put "Tyler Perry's" in front of anything and it was good for a $20 million opening and between $50 and $65 million at the box office.

Not this time though. Single Moms Club will struggle to make it to $25 million and might signal the beginning of the end to Tyler Perry's reign as Mr. Reliable. How reliable? He shares a remarkable distinction with directors Steven Spielberg and Robert Zemeckis as being the only directors who have opened nine films with opening weekend box offices greater than $20 million.

Looking back at the last year or so, it seems that audiences are starting to push back a bit with Tyler Perry and his films, but given their low production costs, it's a safe bet that he will continue to pump out more films.

Another loser this St. Patrick's day is Need for Speed. It was looking to make Fast & Furious money ($117 million opening), but ended up settling for The Internship money ($17 million opening). And we all know that interns are seldom paid well, if anything at all.

Like The Internship, Need for Speed will sputter out before it reaches $50 million in total box office receipts. That means that it's back to the drawing board for those studio head honchos looking for the next big video game turned movie franchise.

At the top of the box office this weekend, Mr. Peabody and Sherman went back in time and fudged the numbers to jump up from second place to the top spot. Its $21.2 million weekend was just slightly down from its opening weekend and long-term its prospects actually ticked up a bit. It's now on pace to break $125 million or so.

300: Rise of an Empire fell like the first film's set of 300 Spartans to Xerxes and his army. The $19.1 million take was good enough for second place, but with such a precipitous drop, it will struggle now to make it to the $140 million I predicted last week.

Frozen continues on its quest to break $400 million. It added another $2 million this weekend, but it should drop like a stone this week after its DVD/Blu-ray release tomorrow. It currently stands ever so close with a total box office take of $396.4 million. I still think that it will fall short, but if you're Disney don't you try one last ditch effort to get it over the hump?

Finally, the Kickstarter experiment Veronica Mars debuted in 10th place to the tune of $2 million. I guess the campaign was a success? While the final numbers won't be known for many months (if ever), I'm pretty sure that Warner Bros. will be happy with its performance. Of course, that doesn't mean that everyone is happy with the process (see below).

Well, that's the mixer for this week. Speaking of mixing, it seems that the L.A. got into the spirit of St. Patrick's day a little early with a quake this morning. Short of mixing like that, have a great week.