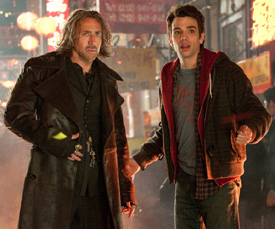 In the long history of bad ideas, I'll admit that I thought the notion of Disney converting its cherished animated short The Sorcerer's Apprentice into a live-action film was right up there towards the top of the list.

Casting Nic Cage in the lead role only added fuel to my hatred inferno. However, Disney marched a whole slew of magically alive broomsticks carrying water to douse out those flames when they released the first trailer for The Sorcerer's Apprentice today.

Producer Jerry Bruckheimer and director Jon Turteltaub rekindle some of that National Treasure magic and seemingly are able to get the most out of Cage again. I'm not going to get my hopes up too much because this is only a teaser trailer and there's still plenty of opportunity for the movie to become a mess.

But, I will say that it's now on my radar of movies to see in 2010. It hits theaters on July 16, 2010. For now, check out the trailer below and see if you can catch the little homage scene to the original animated short.

Tell us what you think of the trailer.