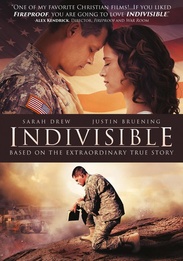 Indivisible is the extraordinary true story of Army Chaplain Darren Turner and his wife Heather, whose lives are fully devoted to serving God, family, and country. But when war etches deep battle scars  both overseas and on the home front  the Turners' rock-solid marriage is shaken to its core. Carrying the burdens the other can't comprehend, they must decide if they're willing to face one more battle: the fight to save their marriage. From the director of The Grace Card and the studio that brought you Fireproof and War Room comes Indivisible, the story of one marriage...one family...under God.

Rated PG-13 for some thematic material and war violence.