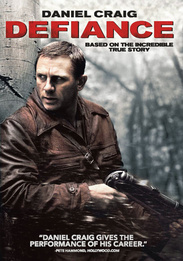 Four Jewish brothers living in Nazi occupied Poland escape into the forest where they join up with Russian resistance fighters in battling the Nazis. Throughout the war they built a village inside the forest and saved the lives of more than 1200 other Jews. Based on a true story.