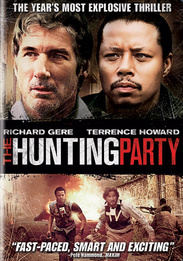 A young journalist (Eisenberg), a seasoned cameraman (Howard) and a discredited journalist (Gere) embark on an unauthorized mission to find the number one war criminal in Bosnia; they find themselves in serious jeopardy when they are mistaken as a CIA hit squad and their target decides to come after them.

Rated R for strong language and some violent content.