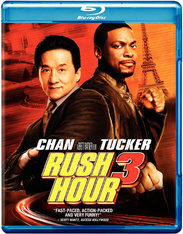 When a Chinese criminal mastermind flees to Paris, there's only one culture-clashed, crime fighting duo for the job. Ready to raise hell in the city of lights, Chief Inspector Lee (Chan) and Detective Carter (Tucker) instead get caught in an explosive battle between French police, the Triad gang and two gorgeous femmes fatales!

With everybody kung-fu fighting to the top of the Eiffel Tower, this one-two punch of hilarious action doesn't let up to the final heart-stopping au revoir!