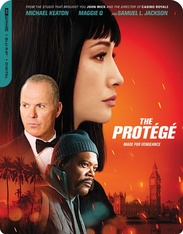 Rescued as a child and raised by legendary assassin Moody (Samuel L. Jackson), Anna (Maggie Q) was trained to become the worldâs most skilled contract killer. When Anna learns that Moody has been brutally killed, she vows revenge. On the murdererâs trail, Anna is entangled with an enigmatic hit man (Michael Keaton) and, as their confrontation turns deadly, the loose ends of a life spent killing weave themselves ever tighter in this adrenaline-fueled action-thriller from the director of CASINO ROYALE.