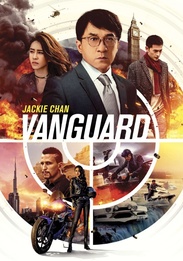 International superstar and martial arts legend Jackie Chan leaps into action as Tang, CEO of the covert security company Vanguard in this gripping action-thriller. After wealthy businessman Qin rats out his corrupt partner in an arms deal gone fatally wrong, he and his family become targets of the world's deadliest mercenary organization - and the fighting power of Tang's team is their only hope to survive. Set in locations across the globe - including London, Zambia, India, an Arabian desert, and Dubai - Vanguard delivers electrifying thrills from start to breathtaking finish!