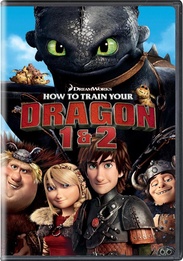 How to Train Your Dragon: Hiccup is a young Viking who defies tradition when he befriends one of his deadliest foesa ferocious dragon he calls Toothless. Together, the unlikely heroes must fight against all odds to save both their worlds in this "wonderful good-time hit!" (Gene Shalit, Today) How to Train Your Dragon 2: When Hiccup and Toothless discover a secret ice cave filled with hundreds of wild dragons and a mysterious Dragon Rider, the two fiends find themselves at the center of an epic battle to save the future of men and dragons!

This is a multiple-item set containing these film/programs:

Set is not rated. Films may be rated individually.