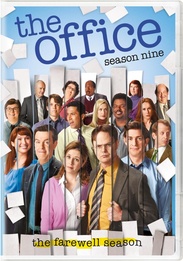 The Dunder Mifflin crew bid farewell to their own little corner of Scranton in the hilarious ninth - and final - season of the groundbreaking, Primetime Emmy Award-winning hit series, The Office. Andy (Ed Helms) is back as regional manager but finds his true calling is in showbiz. Will this finally put Dwight (Rainn Wilson) in charge? Jim (John Krasinski) lands the job of his dreams in Philadelphia, which means big changes for Pam (Jenna Fischer) and Darryl (Craig Robinson). Back at the office, Erin (Ellie Kemper) struggles with matters of the heart, Nellie (Catherine Tate) meddles in everyone's affairs, and Angela (Angela Kinsey) discovers that her dream marriage isn't quite what it seems. And then, the documentary that has been following these quirky co-workers for nine seasons finally airs, and nothing will ever be the same. Developed for American Television by Primetime Emmy Award winner Greg Daniels, The Office: Season Nine features over 5 hours of outrageous bonus content you won't want to miss!