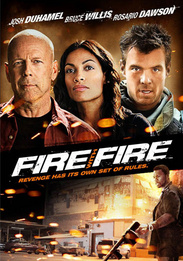 After witnessing the brutal murders of a convenient store owner and his son; firefighter, Jeremy Coleman nearly escapes with his life. As he is forced to testify against the crime lord, Hagan, he is placed in the witness protection program under the watch of the U.S. Marshalls. As his new identity becomes compromised Jeremy is forced to take an unexpected course of action in order to get is life back and save the lives of those he loves.