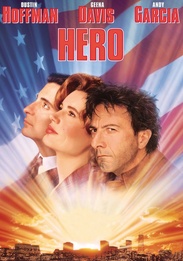 Dustin Hoffman, Geena Davis and Andy Garcia star in this captivating comedy from Stephen Frears, the director of Dangerous Liaisons and The Grifters. Davis is ace reporter Gale Gayley, who literally falls into the story of a lifetime when she's a passenger on an airplane that crashes into a Chicagobridge. In the smoke and darkness, she's saved by a rude, foul-mouthed "hero," who promptly disappears into the night leaving only one shoe behind. When Gale's TV station offers a million dollars to the mystery hero, a gentle Vietnam vet (Garcia) appears to claim the prize and share it with the city's homeless. But this screwball Cinderella story is complicated by the fact that the real hero is asmall-time crook (Hoffman) whom nobody believes. Both men have something heroic inside, as well as something to hide, and it's up to Gale to discover the true meaning of courage.