Tomorrow When the War Began 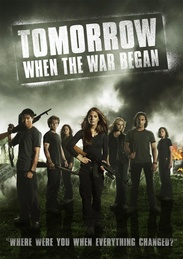 Tomorrow When the War Began is a new film about seven college bound friends who return from a weekend camping trip to discover that a foreign army has invaded their Australian homeland. With their friends and families taken prisoner, they must band together and find a way to fight for their freedom and survival. TWTWB is based on the best-selling book series and is written and directed by Stuart Beattie.

Rated R for some violence.