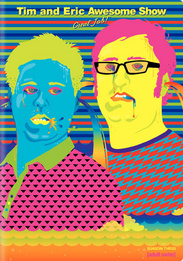 What do you do when your child clown is too tired to perform? Blow an air horn in its ear. Comedy. Tim & Eric Awesome Show, Great Job! Season 3 deals with comedy in the workplace, comedy at home, and outside comedy. Situations. Events. Observations. Starring Bob Odenkirk, Brian Posehn, Bob Druwing, Zach Galifianakis, Will Forte, and others (such as Patton Oswalt and Elisha Cuthbert).